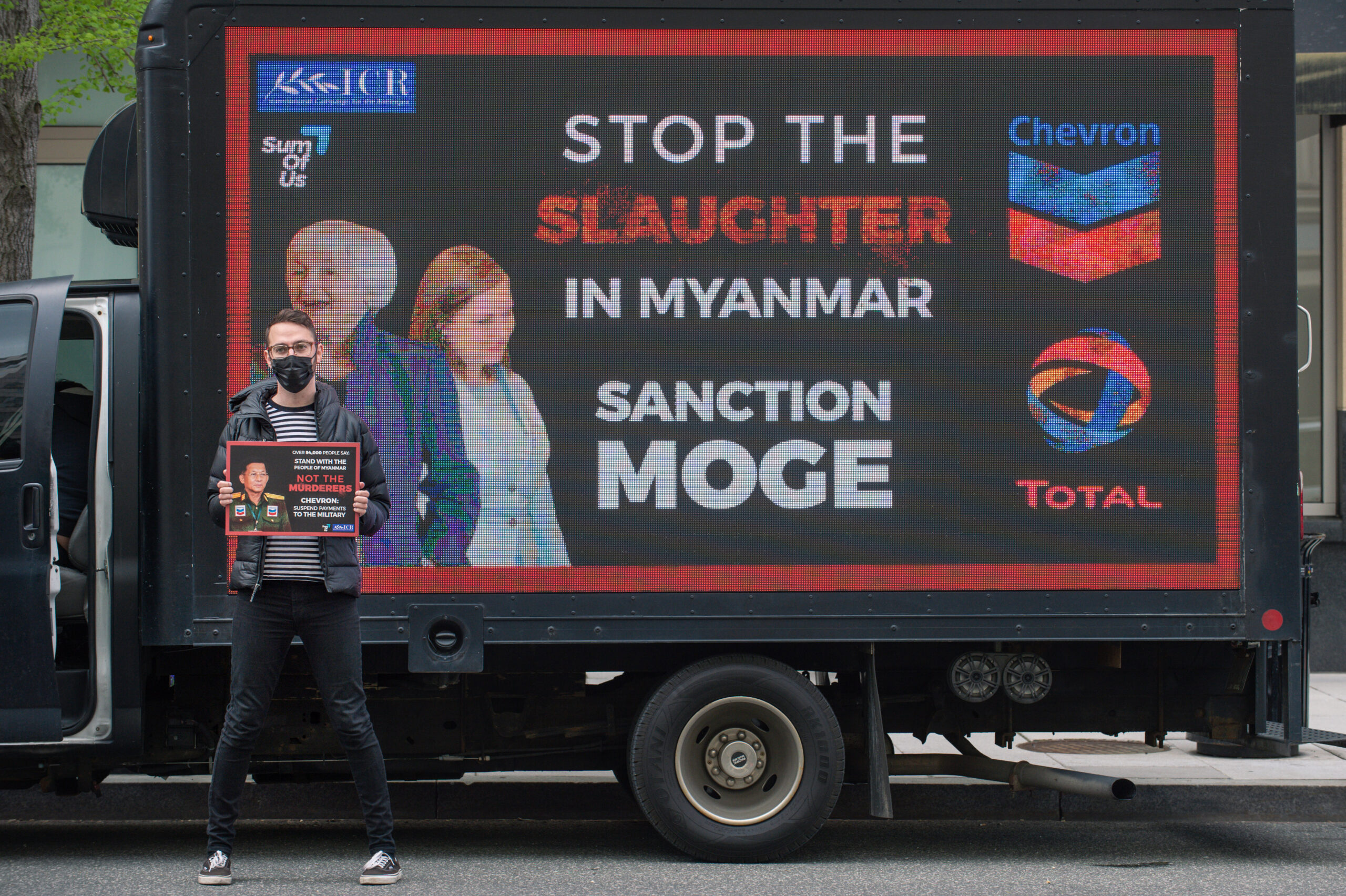 Together, we are ramping up our campaigns to stop the flow of corporate blood money to the Myanmar military. In the past few months, many of you have signed petitions, posted on Chevron and Total’s social media, and joined protests outside the offices of Chevron and Total of France. Your pressure played a part in successfully pressing Total and Chevron’s Yadana gas pipeline consortium to suspend cash dividends to the military-controlled Myanma Oil and Gas Enterprise (MOGE). However, that decision did not stop the 90% of payments to the junta from the Yadana project, which include the army’s share of gas revenues, royalties, cost recovery, and taxes.

Let’s keep up the pressure on Chevron with these actions below!

More importantly, please share the petition to Chevron with your friends and through your social media with this short link: https://bit.ly/nochevron

I will boycott you until you stop the flow of money from the Yadana Project in Myanmar to the Burmese military junta. Learn the truth about Chevron and Total in Myanmar here: https://bit.ly/nochevron

Do you want to organize a demonstration at your local Chevron office or gas station? If so, contact Mike Haack at mike.haack@newmyanmar.org

Like the Coalition Against Chevron in Myanmar – Stop Paying Myanmar Military Facebook page for up-to-date news and campaign materials.

President Biden has already imposed sanctions on top military leaders and some military-owned companies. But it is vital that President Biden go further and impose sanctions on Myanmar Oil and Gas Enterprise (MOGE) as part of stopping oil and gas companies – such as Chevron, Total, Petronas, and Posco – from continuing to bankroll the Burmese military.

Sign our petition urging President Biden to take action to end the flow of money from foreign corporations to Myanmar’s military.

Action #3: Ask your city or state to pass a resolution to end genocide

Last December, Dayton (Ohio) passed the world’s first resolution to end genocide worldwide. Inspired by this action, our supporters around the country, from Indiana to Texas to Florida, are lobbying their cities and their state to pass a similar resolution pressing companies to stop supporting governments engaged in genocide or crimes against humanity.

Read our No Business With Genocide campaign resource page for more details about how you can help introduce a resolution in your hometown.

If you’d like to explore lobbying your hometown, contact Simon Billenness at No Business with Genocide at simon.billenness@nobusinesswithgenocide.org

We can and must build our pressure on Myanmar’s military. Your actions have moved your governments to take some actions and also successfully pressed companies, such as Western Union, online jeweler Angara, and Kirin Brewing, to end business partnerships with the Burmese military.

Together, we can build our movement to end the Myanmar military’s corrupt and brutal rule.