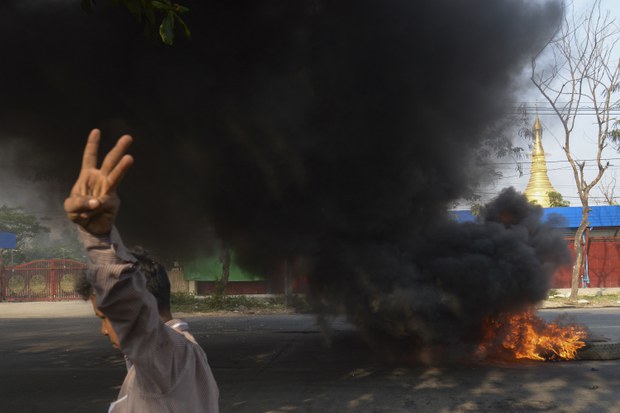 This originally appeared on the Radio Free Asia website.

The army “controls significant segments of the country’s economy” through MEHL and MEC, the U.S. says.

The United States and Britain on Thursday levelled economic sanctions on two Myanmar military holding companies that serve as a critical economic lifeline for the junta that seized power last month, in what the top U.S. diplomat called “most significant action to date to impose costs on the military regime.”

The sanctions, which block assets owned or partially owned by the two military entities in the United States and the United Kingdom, aims to squeeze the junta that deposed leader Aung San Suu Kyi and her elected government on Feb. 1 and has since killed at least 270 people in fierce attacks on daily protests.

“The Burmese military controls significant segments of the country’s economy through these holding firms, which enjoy a privileged position in the Burmese economy,” OFAC said in the statement.

“These sanctions specifically target the economic resources of Burma’s military regime, which is responsible for the overthrow of Burma’s democratically elected government and the ongoing repression of the Burmese people.  These sanctions are not directed at the people of Burma,” it said, using Myanmar’s former name.

“By designating MEC and MEHL, Treasury is targeting the Burmese military’s control of significant segments of the Burmese economy, which is a vital financial lifeline for the military junta,” said OFAC Director Andrea Gacki.

“The revenue that these military businesses generate … provides financial support for the Tatmadaw’s operations with their wide array of international human rights and humanitarian law violations,’ said a 2019 report by the U.N. Independent International Fact-Finding Mission on Myanmar.

“There are strong and persistent business and familial links between the Tatmadaw, its conglomerates MEHL and MEC, and a number of private Myanmar companies and conglomerates, colloquially known as “crony companies,” it said. The Tatmadaw is the Burmese language name of the military,

In a statement on the sanctions, U.S. Secretary of State Antony Blinken said the measures were taken because “members of the Burmese military have taken increasingly disturbing actions aimed at their own citizens since February 1.”

In response to the military’s refusal to disavow the coup and continuing violence against peaceful protestors, today the United States is taking its most significant action to date to impose costs on the military regime,” he added.

Simon Billenness, executive director of the International Campaign for the Rohingya, called the measures a “good start” that should inspire other actors to follow Washington and London.

“We’re hoping that the EU joins the U.S. and U.K in imposing sanctions on the regime, tough and targeted sanctions,” the Washington-based activist told RFA.

In Myanmar on Thursday, the previous day’s silent protest in which people in major cities stayed home to avoid indiscriminate shooting, gave way to protests that were met with gunfire in cities including the commercial center Yangon and Taunggyi, capital of eastern Shan state, toward the border with Thailand.

Security forces shot dead at least four people, injuring many more, adding to a death toll of more than 270 in seven weeks of protest.

In Taunggyi, the, two were killed and more than 10 arrested as authorities violently quelled demonstrations, according to an unnamed source.

“Yes, there were fatalities. I am not sure whether the deceased were in the protest march or not,” the source, who requested anonymity for security reasons, told RFA’s Myanmar Service.

“We heard the bodies were at the military hospital, and the Abbot from the Monastery is talking to them to get their bodies back. Many were also arrested, quite a lot, while at least three others were shot in the legs,” the source said.

“They took away the five men as well as all the food… medicines, and first aid equipment as well as the bed,” a woman at the center told RFA.

“They even took away the food being prepared for the monks as well as all the cooking utensils and crockery. Not a pot was left behind in the kitchen,” she said.

“There is a lot of blood on the streets from injured people, but ambulances cannot come in because the police have blocked all the entrances. Some of the young protesters are fighting back with anything they can find,” said the woman.

In northern Sagaing region’s Khin Oo township, police fired shots to disperse a crowd of protesters who had descended on a police station demanding the release of 14 people arrested for guarding their residential ward on Wednesday night.

Several in the crowd were injured but none were confirmed killed, and the 14 were released around midnight.

“There’s a 75 percent possibility that he could die from his injury. Right now, soldiers from No 33 Brigade are still shooting in the city center. They are making a lot of arrests too,” the Khin Oo resident said.

In Hpa-an, capital of southeastern Karen State, a man was hit in the groin when security forces fired live rounds at protesters there. Local outlet KIC Karen News reported 90 people were arrested in protests.

The shootings came a day after 628 detained protesters, mainly students, were freed in Yangon and other cities.

The Assistance Association for Political Prisoners, an NGO based in Thailand, reported that at least 320 people have been killed in the crackdown as of Thursday, and more than 2,000 remain in custody or face outstanding charges.

Two journalists detained in a March 9 raid stood trial on the first day of their hearing Wednesday in Yangon’s Kamayut township.

According to family members, the founder of chief editor of Kamayut Media, Nathan Maung, a U.S. citizen, and co-founder Hanthar Nyein were brought to the court in Kamayut from Yangon’s Insein Prison. The families did not know what charges the two faced.

Nathan Maung’s family told RFA that they had attempted to reach the U.S. Embassy and the International Committee of the Red Cross (ICRC) for assistance but have not yet been contacted by either entity.

“They took them away for just a while, but we haven’t heard any news about them so far. The last thing we hear was that they are being held at Taung Lay Lone prison for questioning,” Zay Tai said, adding that he was able to escape arrest because he was not at the office when the four were taken in.

“Our editor, a female reporter, the publisher and the security guard were arrested at my house…

My neighbors told me that the police broke down the gate entrance of my compound, searched the building and took away some documents like household registration cards and my laptop.

The editor-in-chief said the journalists were doing their jobs and that the arrest was unlawful.

With the arrests at Kanbawza Tai, the junta has detained 50 journalists and released 30, with two others out on bail, since the Feb. 1 military takeover, according to an RFA tally. At least 15 have been charged, RFA found.