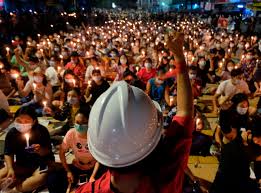 This piece was originally published in the Washington Post.

Alyson Chadwick is the digital campaigns strategist for No Business With Genocide, a coalition campaign to end genocide worldwide. Simon Billenness is executive director of the International Campaign for the Rohingya.

The Myanmar military and security forces are deploying a new weapon against protesters: the video-sharing app TikTok. Described as “digital crack cocaine” by at least one commentator, the app has more than 1.1 billion active monthly users worldwide. Its viewers stand out for their enthusiasm. When Jennifer Lopez posted the same video to TikTok and Twitter, her 5 million TikTok followers viewed it 71 million times. Her 45 million Twitter followers only watched it 2 million times.

Members of the Myanmar security forces are using TikTok to intimidate demonstrators who are taking to the streets to voice their opposition to the Feb. 1 military coup. One video that was first posted on Feb. 13 had been watched more than 180,000 times as of early March. In it, a man wearing military gear and a mask warns protesters: “Don’t touch General Min Aung Hlaing. It will cost you your life. Hear? You will die.”

Similar video clips have racked up millions of views. In another video, a man points his gun at the camera and announces: “I will shoot in your f–––ing faces … and I’m using real bullets. I am going to patrol the whole city tonight, and I will shoot whoever I see. … If you want to become a martyr, I will fulfill your wish.” Earlier this month, the digital rights group Myanmar ICT for Development (MIDO) said it had found at least 800 videos put up by military and police members.

The threats are real. Since the military seized power, security forces have demonstrated an appalling readiness to kill peaceful protesters.

In the realm of social media, TikTok enjoys a unique position. Even before the military limited access to Facebook, Instagram and Twitter, videos on TikTok had much greater reach. The algorithms used by this platform make it more likely that user-created content will go viral. Before the military started tracking protesters’ activity and shutting down access to the Internet, individuals used TikTok as an organizing tool. While protesters can still access the platform, that access is limited.

When reached for comment, TikTok spokeswoman Tiffany Diep sent a statement: “The promotion of hate and violence has absolutely no place on our platform. We are aggressively removing content in Myanmar that violates our principles, and continue to monitor the situation.”

This is a welcome start — but it is only a start. What makes TikTok so popular also makes it hard to control. The large number of videos shared on the platform, combined with the likelihood that some of them will go viral, overwhelms even the most robust monitoring system. This could end up being the largest game of whack-a-mole ever.

Yet TikTok certainly shouldn’t stop there. There are several policies that could have a salutary effect.

TikTok should issue a statement condemning all violence in Myanmar and reaffirming the company’s commitment to keeping violence off its platform. This would alert viewers that their access to some content will be limited as well as warn the military and security forces that their actions have consequences. It would alert those who are prone to uploading violent videos that their actions can lead to removal from the platform. Right now, they are acting with impunity. Simple removal without such a statement doesn’t send the same message.

The company should also remove the accounts of users who are connected to the military and police. And finally, it should follow through by banning other users who violate the policy.

Freedom of speech is one of the most fundamental rights we all have. The decision to curtail it should never be made lightly. But the open incitement to violence is clearly a step too far. Now that Myanmar security forces are using its platform in the commission of atrocities, TikTok must ban those who abuse its tool or risk becoming complicit in their crimes.