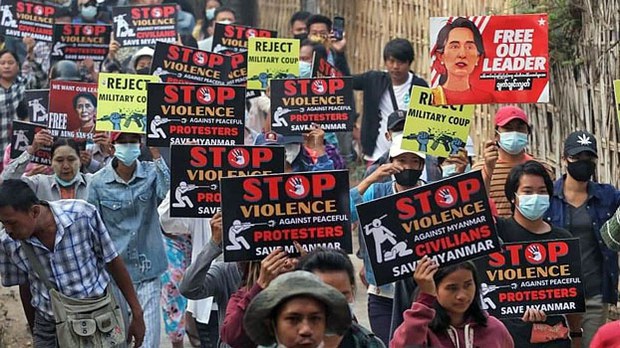 The junta that overthrew Aung San Suu Kyi’s elected government on Feb. 1 also imposed a 24-hour shutdown of mobile internet service in an attempt to cut off lines of communication among protesters and other members of a nationwide civil disobedience movement (CDM) that has opposed military rule for six weeks.

The suspension of internet service forced court officials in the capital Naypyidaw to postpone a videoconference hearing of the 75-year-old deposed leader, who has been under house arrest since the coup and is facing a handful of what supporters say are spurious charges.

Eleven of the protesters killed Monday were slain in violent crackdowns in the cities of Mandalay, Yangon, and Magway, and in Shan state, witnesses said.

In Myingyan, a town in central Myanmar’s Mandalay region, five protesters died and 13 were seriously injured when police and soldiers sprayed tear gas and shot live ammunition at crowds.

RFA has recorded at least 170 deaths as of Monday, including 60 deaths across the country on Sunday, the bloodiest day since the coup.

In a statement from Geneva on Tuesday, U.N. High Commissioner for Human Rights spokesperson Ravina Shamdasani said the agency had confirmed that “at least 149 people have been arbitrarily deprived of their lives since (Feb. 1), as a result of unlawful use of lethal force against peaceful protestors in Myanmar.”

“Of these, at least 11 were killed on Monday, and 57 over the weekend. There are many more reports of further killings that we have been not been able to corroborate yet,” Shamdasani said.

U.N. Secretary-General António Guterres is “appalled by the escalating violence in Myanmar at the hands of the country’s military,” his spokesman said in a statement.

“The killing of demonstrators, arbitrary arrests, and the reported torture of prisoners violate fundamental human rights and stand in clear defiance of calls by the Security Council for restraint, dialogue and a return to Myanmar’s democratic path,” said spokesman Stéphane Dujarric.

The Assistance Association for Political Prisoners (AAPP), a watchdog group, said that as of Monday, 2,175 people had been arrested, charged, or sentenced in relation to the military coup, with 1,856 still being held or with outstanding warrants. More than 70 people are in hiding, it said.

In Myanmar’s second-largest city, Mandalay, two men died when police and soldiers fired at anti-junta protest column, witnesses said. Rallies were held in other parts of the city, with schoolteachers staging a sit-in protest and attorneys riding motorbikes on town streets in defiance of the military.

One column of about 3,000 protesters that set out around 9 a.m. Monday from Thonzu Pagoda was confronted and shot at by 50 police officers and soldiers an hour later near the Electric Power Corporation office, said a protester in Mandalay’s Myingyan township.

“Three people died at the private clinics we sent them to,” he said. “An elderly Muslim woman from a nearby house who had opened her doors to protesters to hide them also was killed by gunfire. The other two were middle-aged men.”

At least five people in all died amid the violence, including two from a university student union, and four of the many wounded protesters are in critical condition, he said.

In Yangon’s Tamwe township, groups of young people held an anti-junta rally on Kyaikkasan Road, where one man died by police gunfire Sunday afternoon. Similar protests were reported in three other townships in Yangon, the country’s former capital and commercial center.

In one a video that went viral on social media, policemen on Sunday were recorded dragging away Khant Nyar Hein, an 18-year-old first-year medical student who was shot in the street during a protest in Tamwe. Authorities asked his family to retrieve the young man’s body Monday morning, his father said.

The Chinese Embassy in Yangon issued a statement Monday calling for legal action against those responsible for setting ablaze Chinese-funded garment factories in an industrial zone a day earlier in which Chinese workers were trapped and injured.

In Shwepyitha township, local residents tried to extinguish a fire at the Solamoda Garments Co. Ltd. factory that spread to a nearby backpack factory. But the buildings were still burning at the time of publication on Monday.

RFA was unable to obtain first-hand details about the fires because of the growing number of arrests of or threats against journalists by local authorities.

“The young, mostly female, garment workers are the forefront of the civil disobedience movement” and launched a general strike on March 8 to support restoring democracy, he wrote.

“But the apparel factory owners are intimidating and even firing workers for going on strike and taking part in pro-democracy protests,” added Billenness.

Germany-based Adidas, the only one of the three firms to respond to an RFA request for comment, said on March 12 that six of its 525 suppliers are located in Myanmar.

“We are in close exchange with other brands, industry associations, and civil society organizations about the current situation,” said Stefan Pursche, senior manager for media relations at Adidas.

Also on Monday, two men were killed and four others were injured when security forces opened fired on a group in Aunglan township, Magwe region, a resident said.

“When people fled the scene, police took away five motorcycles left on the roads,” the local said. “A huge crowd later surrounded the police station, and that was when they started shooting. They used both rubber bullets as well as live rounds, and six people got hit.”

In Pathein, the capital of Ayeyarwady region, police and military attacked residents as they prepared for nighttime protests, killing three people and critically injuring another five, a witness told RFA.

In Aungban, a major trading town in southern Shan state, one protester died and two others were injured during a crackdown by police and soldiers, witnesses said.

The Naypyidaw hearings for detained State Counselor Aung San Suu Kyi and President Win Myint, who also faces charges, were rescheduled for March 24 because of the internet service shutdown.

Aung San Suu Kyi’s legal team submitted applications for seven attorneys to represent her at court, but only two were approved, he added.

Now that military authorities have extended the internet service shutdown from nighttime to around-the-clock, companies and ordinary residents say they are having problems conducting business.

Phone lines and internet service were first shut down on Feb. 1, but were available the next day. The services were suspended again on Feb. 6-7, but resumed the following day. As of Feb. 15, internet service has been cut off daily between 1 a.m. and 9 a.m.

Monthly internet service subscribers with fiber-optic lines said they were able to go online Monday morning, but that Wi-Fi services provided by the companies Ooredoo and Telenor were not available.

An Ooredoo spokesperson said she did not know when the company would be able to make the service available. A computer-generated reply to phone queries said that internet service had been suspended temporarily in accordance with instructions from the Ministry of Transport and Communications.

“The military authorities want to control the communications between protesters of the Spring Revolution,” said a man from Yangon’s Insein township who declined to give his name, referring to the domestic civil resistance efforts in opposition to the coup d’état. “Wi-Fi is not available everywhere, but with the mobile data, they can communicate very easily.”

Others said they believed the internet service shutdown was an attempt by the junta to stop people from  live-streaming acts of violence by soldiers and police during protests.

Rural residents who depend on mobile internet service to transfer money and conduct business online said they were stuck, especially since nearly all banks have remained closed for weeks. Women whose husbands are migrant workers and routinely transfer remittances online also are in a bind.

“There are many women here who need to go to the hospital for various reasons, and some of their husbands who are in Thailand, China or Malaysia now find it impossible to send money home,” said a man who works at a money transfer services in Yinmabin, Sagaing region.

RFA could not reach military regime spokesman Maj. Gen. Zaw Min Tun for comment on the shootings or the internet shutdown.