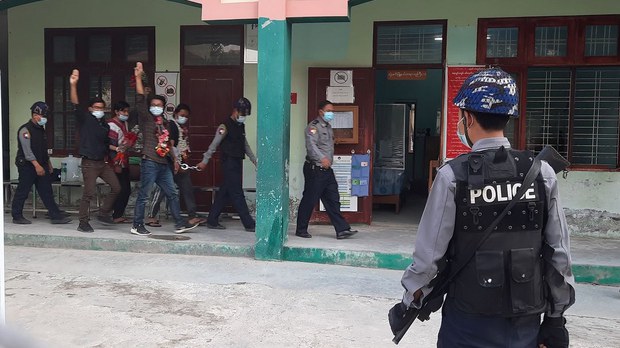 Protests against the putsch expanded in the country, while the global response grew more critical.

Myanmar’s ruling junta ordered the suspension of Twitter and Instagram on Friday after a day of spiraling nationwide protests against the military coup that has spooked some investors and brought increasing criticism from the international community.

Days after the regime shut down Facebook, the most popular social media site, the Ministry of Transport and Communications ordered Twitter and Instagram shut off to restrict posting and sharing of “inciteful news and disinformation” that could “damage the stability of the state and undermine the interest of the people,” said the directive.

The tightening clampdown on information on day five of the military takeover came as hundreds of government employees from various sectors joined a protest campaign dubbed the “Civil Disobedience Movement” in the capital Naypyidaw. They demanded the release of State Counselor Aung San Suu Kyi and other detained leaders and called on the military to respect the results of the country’s November 2020 election, which saw her National League for Democracy (NLD) party win in a landslide.

“We are here to show our support for the people,” Thet Lwin Oo, assistant director of the Ministry of Ethnic Affairs, told RFA’s Myanmar Service. “We worry for our future because we are government employees.”

On Monday, the military dissolved parliament, citing allegations of voter fraud in a bloodless coup that gave it control of the country. Aung San Suu Kyi, Myanmar’s de facto leader, was taken into custody along with other NLD leaders in the putsch, which saw army chief General Min Aung Hlaing declare a one-year state of emergency. The 75-year-old Aung San Suu Kyi remains under house arrest.

Raucous street protests and criticism of the coup on social media have since been met with arrests in cities across Myanmar, drawing condemnation from Western governments. In New York on Thursday, the U.N. Security Council expressed “deep concern” at the declaration of the junta’s state of emergency and the “arbitrary detention” of Aung San Suu Kyi, President Win Myint and others. As of Friday morning, 134 NLD members had been detained, according to the Irrawaddy online news website.

In addition to Friday’s protests in Naypyidaw, more than 300 academic staff members and 200 students from Dagon University in Myanmar’s economic center of Yangon held a protest in front of the school’s Convocation Hall, displaying a three-finger salute borrowed from Thailand’s democracy movement to condemn the military’s actions.

Nyi Nyi Lwin, a professor at Dagon University’s International Relations Department, told RFA that academic staff took part in the protests “of our own volition and without any outside pressure.”

“We want the elected leaders to be released and we condemn the military takeover, which shouldn’t have happened at all,” he said.

Min Han Htet, president of the Dagon University Students Union, said students would go on fighting to ensure that Monday’s coup would be “the country’s last military takeover.”

“There will be more public demonstrations throughout the country in the coming days and I believe this kind of movement will have to be led by us students,” he said. “With the help of the entire population, we must take down this military dictatorship so that it won’t be a threat to future generations.”

Dagon University staff and students were joined by staff from the Yangon Institute of Education, who launched a “red ribbon campaign” in support of the color of the NLD’s flag and to signal their condemnation of military rule.

In total, thousands of government and medical staff, as well as students and academics at 91 government hospitals, 18 universities and colleges and 12 government departments in 79 townships across the country were on strike in protest of the coup, according to the Civil Disobedience Movement Facebook page.

Similar protests were held by academics and students at universities in the seats of Myanmar’s Magway region, and Kayin, and Kachin states; while red ribbon campaigns were launched in Mandalay, Ayeyarwaddy, Taninthayi and Yangon regions, as well as Chin and Rakhine states.

Anti-coup protests also spread Friday to the townships of Sittwe in Rakhine state, Lashio in Shan state, Dawei in Tanintharyi region, Loikaw in Kayah state, Kalemyo in Sagaing region, and Chauk and Pakokku in Magway region.

The protests at educational institutes came a day after Cho Yu Mon, the dean of the Hpa-an Technological High School in the seat of Kayin state, was detained by police for promoting civil disobedience during a protest at the school.

Cho Yu Mon has been charged with defamation of the state under article 505(B) of the penal code and is being held without bail at Hpa-an Central Prison, fellow teacher Naing Say, who recorded a video of the arrest that has since gone viral on social media, told RFA.

“The main reason for her arrest is that we held a civil disobedience movement campaign at our school, Naing Say said, adding that her case is set to be heard in court on Feb. 17.

Meanwhile, military authorities in several townships on Friday began arresting people who have taken part in a nightly nationwide pot-banging campaign to signal their frustration over the coup.

On Friday, authorities detained six people in Mandalay region’s Chan Mya Tharzi township, bringing to 30 the number of people arrested in the region since the beginning of the campaign on the evening of Feb. 2. Arrests have also been made in Myingyan, Magway, Maypyidaw, and Yangon.

Several people in both Mandalay and Yangon regions were detained for banging pots but released after police were surrounded by angry residents.

Most pot-bangers are being detained and charged under section 47 of Myanmar’s Police Act, which allows the authorities to arrest those who “disrupt safety and security in public spaces” without warrants. Others are being targeted under article 27 of the Civil Administration Act, which carries a fine of 5,000 kyat (U.S. $3.65) or up to seven days in prison.

Shortly after the launch of the pot-banging campaign began, police nationwide were ordered to monitor and file reports on participants. The directive was posted to social media earlier this week and has since gone viral.

Human Rights Watch condemned the information controls Friday, saying that international human rights standards require internet restrictions to be “provided for in law and be necessary and proportionate and pursuant to a legitimate aim,”

“Internet shutdowns fail to meet these standards and hinder access to information and communications needed for daily life, which is particularly vital during times of crisis and the Covid-19 pandemic,” it added.

On Friday, foreign firms began distancing themselves from partnerships with Myanmar’s military, which is involved in a myriad of sectors, including banking, breweries, buses, telecoms, tobacco and media.

Kirin Holdings of Japan announced it had ended its relationship with the Tatmadaw, prompting the International Campaign for the Rohingya—which advocates on behalf of the Muslim ethnic group that endured a brutal military-led crackdown in 2017—to suggest it had “finally stepped too far” in orchestrating the coup.

Simon Billenness, executive director of the International Campaign for the Rohingya, said in a statement that Kirin had “finally acknowledged its grievous mistake” in choosing to do business with Myanma Economic Holdings Public Company Limited, a military-owned conglomerate, and called on corporations around the globe to also cut ties with the military.

In particular, he called out Facebook—which the junta blocked access to on Thursday—for providing a platform that the military uses to recruit soldiers and conduct business, as well as jewelers that buy gems the military uses as a substantial source of revenue.

Billenness also called on governments to hold the Myanmar military accountable for its actions through sanctions against Myanmar military leaders, the army’s extensive business empire, and the military’s business associates.

Kirin’s announcement came as Myanmar’s former student leaders Ko Min Ko Naing and Ko Jimmy of the 88 Generation Peace and Open Society urged the public to take a variety of approaches to oppose military rule, including a boycott of its businesses.

US lawmakers weigh in

In a letter to Secretary of State Antony Blinken, the senators called on the White House to press for the immediate release of all political prisoners detained in association with the coup, impose targeted sanctions on the senior leadership of the Tatmadaw, and organize multilateral economic and diplomatic pressure with global allies.

They also urged the administration to use the U.S. position on the United Nations Security Council to push for a “quick and serious” U.N. consideration of the situation in Myanmar, remain engaged with partners in the country, and to call for protections for the roughly 600,000 Rohingya who still live in Rakhine state.

“Given the Tatmadaw’s long history of human rights violations and suppression of democracy, there is no reason to believe Burma’s military leaders will return the country to democratic rule without strong and sustained international pressure,” the Senators wrote, using the British colonial name for Myanmar.

The lawmakers’ call for action came a day after U.N. Special Envoy for Myanmar Christine Schraner Burgener spoke with Myanmar’s Deputy Commander-in-Chief Vice-General Soe Win, condemning the military action and calling for the immediate release of all detained government officials, according to U.N. spokesperson Stephane Dujarric.

“[The Special Envoy] had a virtual meeting with the deputy commander in chief of the armed forces of Myanmar,” Dujarric told reporters on Friday.

“She reiterated the Secretary-General’s strong condemnation of the military action that disrupted the democratic reforms that were taking place in the country. She also reiterated her call for the immediate release of all detained and emphasized the need to advance progress on key areas in regards to a safe, dignified, voluntary and sustainable repatriation of the Rohingya refugees.”

Attorney Khin Maung Zaw, who is representing Aung San Suu Kyi and President Win Myint, told RFA Friday that he had been unable to meet with his clients, who are both under house arrest. Aung San Suu Kyi was charged under the Section 8 Import & Export Law for ownership of “illegal walkie-talkies,” while Win Myint was accused of violating Section 25 of the Natural Disaster Prevention Law.

Pyi Pyo, an elected member of parliament for the NLD, said he expects the military to bring charges against additional party members.

“This coup was launched by a small group of senior officers and we are hoping to see good decent Tatmadaw officers who would stand on the side of the people,” he said.