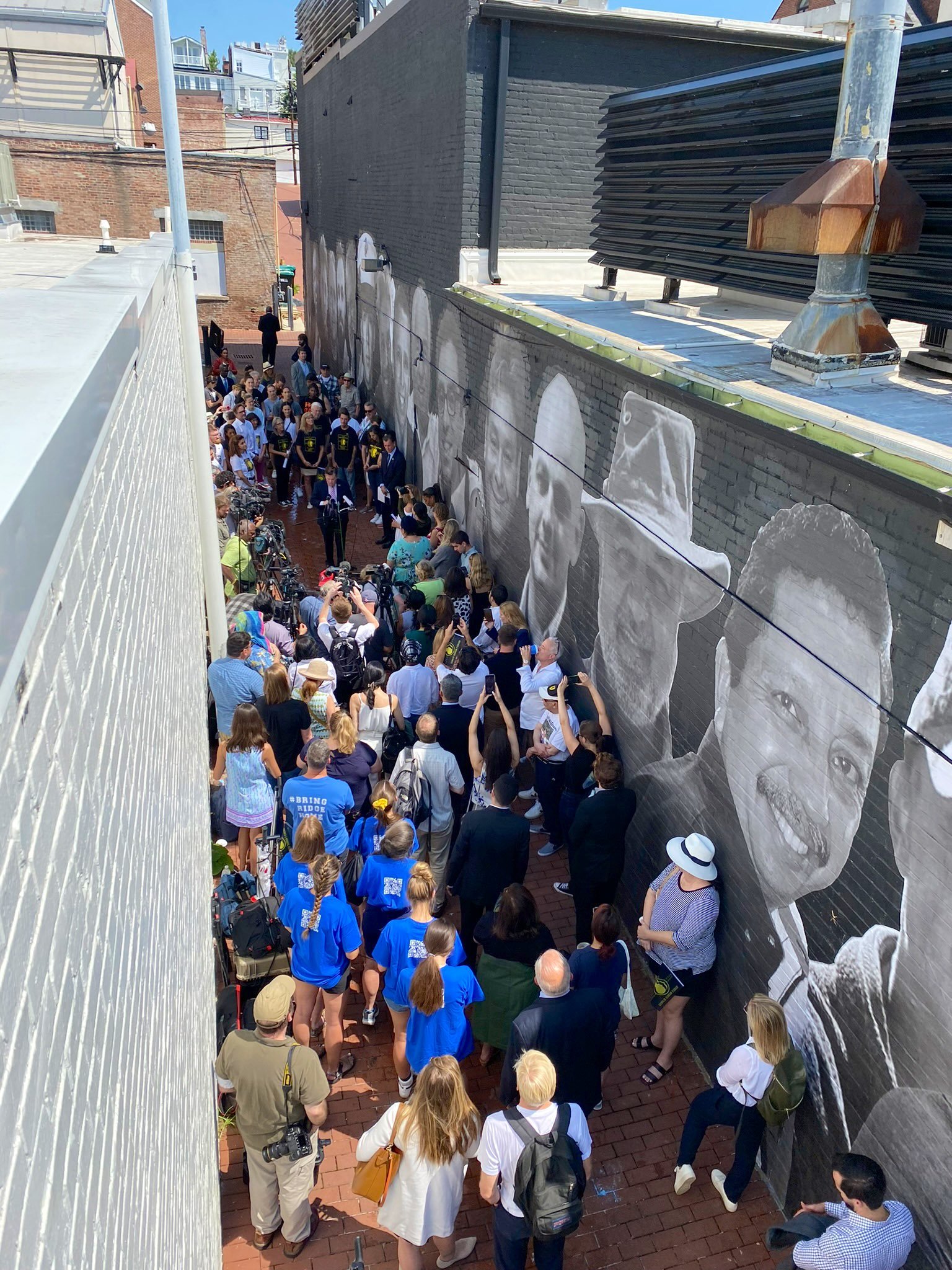 This release came from our friends at #FreeRusesabagina.

WHEN: Tuesday, July 26, 2022
Mural Viewing & Press Conference
Media availability starting at 11:00 am EDT
WHERE: 3125 M Street, NW; Washington, D.C. 20007 (alley between Levain Bakery/Irish Pub)
WHO: Friends and family of Paul Rusesabagina and the #FreeRusesabagina team, who were not able
to join the unveiling of the mural last week, will observe the mural and talk with the media about efforts in the US and abroad to gain the release of Hotel Rwanda humanitarian Paul Rusesabagina from wrongful detention in Rwanda. He was kidnapped, tortured, and held in solitary confinement by Rwanda’s president Paul Kagame in August of 2020.

Live streaming will be available on the #FreeRusesabagina Facebook page.
Mural and photo credit: Isaac Campbell

On July 20th, the Bring Our Families Home Campaign, a campaign led by family members of Americans wrongfully detained or held hostage abroad, unveiled a public mural in the Georgetown neighborhood of Washington, D.C. The mural, designed and installed by Iowan artist Isaac Campbell, will use the wheat paste technique to capture the faces of 18 Americans held hostage or wrongfully detained abroad. According to the James W. Foley Legacy Foundation, there are actually 64 publicly known cases of Americans being held hostage or wrongfully detained around the world. Given families are often reluctant to publicize or inform the U.S. government that their loved ones have been taken, there are likely even more. With this public mural, families of American hostages and wrongful detainees hope to increase attention to the plight of their loved ones, to educate the public about hostage diplomacy, and to create community advocacy that will encourage the Biden administration to use all tools available to them to urgently bring them home.
Isaac Campbell is an artist and communication studies scholar from central Iowa. He has been awarded numerous local, state, and federal grants for his wheat paste murals. In 2018, he was awarded a Fulbright student research assistantship working in Budapest, Hungary with the National Ethnographic Museum, Fortepan archiving project team, and the Hungarian National Gallery. His written and creative work focuses on community-based public art, social justice, collective memory, and vernacular photography. Mr. Campbell prides himself on collaborating with local leaders and activists to enable community-based art projects by teaching volunteers and children how to create humanistic art in their communities.

With the wheat paste mural for the Bring Our Families Home Campaign, Mr.Campbell is using tools available to him – his art – to bring attention to the 64 American hostages and wrongful detainees held around the world. Mr. Campbell says, ‘The mural is made from flour, water, sugar, and paper – it will fade, tear, and eventually disappear over time. What will be done for these Americans by the time the mural disappears? I hope this work reminds us all of the urgency of this campaign and inspires our government to use the tools available to bring these American citizens home – before their faces fade away and disappear from this wall.’

The Bring Our Families Home Campaign is a family-led campaign of various family members of Americans currently held hostage and wrongfully detained abroad, as publicly identified by the James W. Foley Legacy Foundation. The Campaign includes the parents, children, aunts, uncles, nieces, nephews, and friends of Americans whose only crime is being American and who are now being used as political pawns. The Campaign’s goal is to encourage the Biden Administration and our national political leaders to support the use of every tool available – including trades – to secure the prompt return of Americans held abroad.