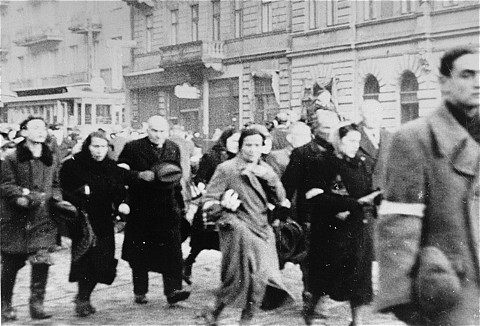 “We knew perfectly well that we had no chance of winning. We fought simply not to allow the Germans alone to pick the time and place of our deaths. We knew we were going to die. Just like all the others who were sent to Treblinka… Their death was far more heroic. We didn’t know when we would take a bullet. They had to deal with certain death, stripped naked in a gas chamber or standing at the edge of a mass grave waiting for a bullet in the back of the head… It was easier to die fighting than in a gas chamber.”

After Germany invaded Poland in 1939, Jewish people were rounded up and placed in ghettos around the nation. The largest was in Warsaw. Nearly 400,000 people were packed into an area that was roughly one square mile. In November 1940, the area was walled off from the rest of the city. Anyone caught leaving the ghetto was shot. The Nazis controlled what was allowed to enter the area and people starved by the thousands.

On July 22, 1942, the Germans began deporting Warsaw ghetto residents to the death camp, Treblinka. In two months, 265,000 people had been deported to Treblinka. Word began to trickle back about what was happening there.

The deportations were carried out at the Umschlagplatz – a train station and adjacent square situated on the edge of the ghetto. Those deported were packed into sealed, locked freight cars with little water and poor ventilation.

When the deportations began the Nazis promised that people who voluntarily reported for “transfer” would receive three kilograms of bread and one kilogram of jam. After a few days the volunteers stopped coming, and the Nazis switched to siege tactics: city blocks would be closed off and the Jewish Police would remove the buildings’ residents to the streets. The Germans would carry out a selection while Polish or Ukrainian policemen would search in the abandoned homes for Jews in hiding. Many Jews who hid in the buildings or tried to escape the selection on the street were murdered on the spot. Most of the Jews who underwent the selection were chosen for deportation and sent to the Umschlagplatz.

Between 55,000 and 60,000 people remained in the ghetto after the deportations stopped. Residents began smuggling in weapons to ready themselves should they start up again. Many blamed themselves for not fighting back sooner.

The final Aktion began on April 19, 1943, the eve of Passover. The fighting groups and ghetto inhabitants barricaded themselves in bunkers and hideouts, their demonstrations of resistance taking the Germans by surprise. The ZOB scattered its positions throughout the ghetto; the ZZW did most of its fighting at Muranowska Square, impeding the Germans’ attempts to penetrate their defenses. In response, the Germans began to systematically burn down the buildings, turning the ghetto into a firetrap. The Jews fought valiantly for a month until the Germans took over the focal points of resistance. It was the first popular uprising in a city in Nazi-occupied Europe.

The Warsaw Ghetto Uprising became an example for Jews in other ghettos and camps. The uprisings that followed, however, were smaller in scope because of their isolation, a shortage of arms and hostile surroundings.

It is easy to look at historical events in a clinical light. People are reduced to numbers. Six million is a hard number to wrap a head around. Events like this should remind us all that it was six million individuals who were murdered.