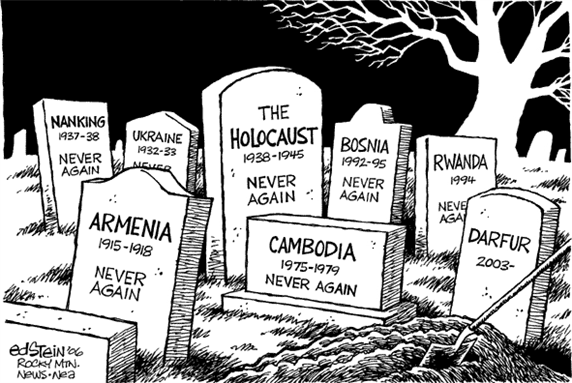 When are we going to end genocide?

April is Genocide Awareness Month. April was selected because of the number of genocides that started in April. The Rwandan, Armenian, and Iraqi Kurd genocides all started during this month. Genocide Awareness Month is crucial for educating the world about past and current genocides. As time passes, memories of the atrocities fade. This makes the soil fertile for more violence. It would be nice to think of genocide as something that happened a long time ago in a galaxy far, far away but it is happening right now around the globe.

End the genocide in China

People belonging to ethnic, cultural, and religious groups in northwestern China, including Uyghurs, Kazakhs, Kyrgyz, and Hui, are currently the target of the largest organized detention of an ethnoreligious minority the world has seen since World War II. Since 2017, over one million have been detained. Detainees are made to work under constant surveillance, with assigned minders and no freedom to leave. Their forced labor contributes to the production of goods for numerous multinationals.

On April 6, we will protest Urban Outfitters’ complicity in using cotton from the Xingjiang region of China. (Note: we have reports that its subsidiary, Anthropologie uses Uyghur cotton)

If you would like to attend, please check out our event page or email me. Or just show up!

We need to rescue Paul Rusesabagina.

About 589 days ago, the hero from Hotel Rwanda was kidnapped and taken to Rwanda. Next he was arrested, tortured, and convicted of crimes he did not commit. The United Nations Working Group on Arbitrary Detention (UNWGAD) released an advance copy of its opinion on Paul’s case and his treatment. Now, Paul Rusesabagina’s health has reached a crisis point. He has been denied access to his medicine. Paul is a 67-year-old cancer survivor who has high blood pressure. He is now suffering from partial facial paralysis, headaches, and dizziness. He was also denied access to his lawyers, family, legal documents, and anything he could use to work on his case.

UNWGAD has called for Paul’s immediate release. From the above press release:

According to the opinion, given the circumstances of the case the appropriate remedy under international law is for Rwanda to immediately “take urgent action to ensure the immediate unconditional release of Mr. Rusesabagina.” In addition, UNWGAD members found that Rwanda should “accord him an enforceable right to compensation and other reparations.“

Please contact your member of Congress to ask them to support H. Res. 892, which calls on Rwanda to release Paul.

Myanmar deserves to be free.

Since the military coup on February 1, 2021, the junta has killed 1,723 people. We have been working with our allies and partners to push companies to cut ties with the Myanmar military. We pushed countries to sanction key industries to cut off the spigot of money that is keeping the violent junta in place.

We organized hundreds of meetings between members of the Burmese diaspora and Congress, rallies, lobbying training sessions, and collected hundreds of thousands of letters and petitions.

Will you help us keep up this important work?

We need your help to continue. Please click here if you can donate anything.